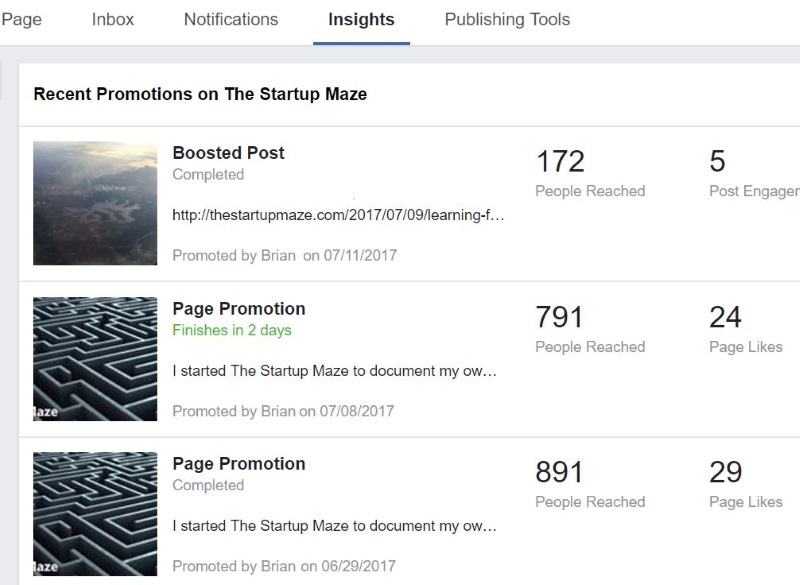 So I’m not in any position either with the card game or the fitness app to start advertising them, but I was curious to get my feet wet and learn the basics of Facebook ads so I can see how that will fit into the marketing strategy of both.  I noticed, after setting up a Facebook page for this blog, I started getting coupons in my Facebook feed for $30 off the price of a Facebook ad for the blog’s Facebook page.  I figured it was worth giving it a try and, now that I’ve had a chance to play with it a bit, wanted to share my results.

The first promotion I did started on 6/29 and ran for 7 days.  It was a promotion of the page itself, and it showed the cover image with the start of the page description above it.  Facebook had me pick some target parameters to narrow down the groups that would see the ad.  I would have just entered interests like startups, entrepreneurship, etc., but after entering in my interest targets, Facebook told me that my target was too broad and I needed to refine it more.  I ended up adding the United States as a target country and for age I entered 24-64.  I would have left it open to more countries but was unable to do so.  The ad had me pick a max daily spend and number of days for the ad to run.  I chose 7 days and a max of $5 per day.  Since I had a credit Facebook gave me for $30, this would only cost me up to $5.  The results of the ad were as follows – The total cost was $34.96 but after the $30 credit, I paid $4.96.  I am able to see on a page within the site that the ad was seen by 891 people and received 29 likes, $1.21 per like.

Wanting to see if they were stacking the likes to get me to do more, I tried another, expecting to see similar results.  I ran the exact same promotion, this time without the $30 credit.  It still has 2 days left, but for the first 5 days, the reach was 791 with 24 likes, which works out to $1.27 per like.  It’s not too far off the first one.

While I was in configuring the ads, I noticed that it was possible to boost a specific post as well.  I wanted to give this a go, so I picked the recent post on my travel experience influencing my thinking on how I want to treat customers.  I boosted it for a day, with a max budget of $3.  Looking at the ad in the results, it looks like I inadvertently set a filter for location – Pennsylvania.  So this boost was shown to people 18-64 in the state of Pennsylvania and got 5 likes with 172 people reached, for a cost of $.60 per like.  It’s interesting to see that the boosted post produced 2x better results than the site ads.  I don’t have a lot of data just with the three ads I’ve run, and it could be a fluke, but it will be interesting to see if those numbers continue.  I will probably try different combinations of filters, budgets, and ad types over the coming months to learn what I can about what works and what doesn’t.  I’ll keep all the results in this file in the Sample Files page.